) using the PSO algorithm. A thermodynamic model of the integrated system was developed from the application of mass, energy and exergy balances to each component, which allowed the calculation of the exergy destroyed a fraction of each equipment, the power generated, the thermal and exergetic efficiency of the system. In addition, through a sensitivity analysis, the effect of the main operational and design variables on thermal efficiency and total exergy destroyed was studied, which were the objective functions selected in the proposed optimization. The results show that the greatest exergy destruction occurs at the thermal source, with a value of 97 kW for the system without Reheater (NRH), but this is reduced by 92.28% for the system with Reheater (RH). In addition, by optimizing the integrated cycle for a particle number of 25, the maximum thermal efficiency of 55.53% (NRH) was achieved, and 56.95% in the RH system. Likewise, for a particle number of 15 and 20 in the PSO algorithm, exergy destruction was minimized to 60.72 kW (NRH) and 112.06 kW (RH), respectively. Comparative analyses of some swarm intelligence optimization algorithms were conducted for the integrated S-CO2-SORC system, evaluating performance indicators, where the PSO optimization algorithm was favorable in the analyses, guaranteeing that it is the ideal algorithm to solve this case study. 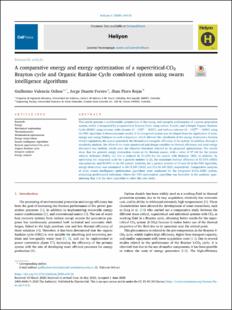