Increasing energy needs have led to soaring fossil fuel consumption, which has caused several environmental problems. These environmental aspects along with the energy demand have motivated the search for new energy systems. In this context, biofuels such as biodiesel have been developing into a substitute for conventional fuels. Microalgae are considered a promising option for biodiesel production due to their high lipid content. Therefore, it is important to analyze the technical aspects of the biodiesel production system. In this work, the inherent safety analysis of three emerging topologies for biodiesel production from microalgae was performed using the inherent safety index (ISI) methodology. Selected topologies include biodiesel production via lipid extraction and transesterification, in-situ transesterification, and hydrothermal liquefaction (HTL). The results revealed that the processes are inherently unsafe achieving total inherent safety index scores of 30, 29, and 36. The main risks in the cases were associated with the chemical safety index. Operating conditions represented no risk for topologies 1 and 2, while for topology 3 pressure and temperature were identified as critical variables. In general, topology 2 showed better performance from a safety perspective. 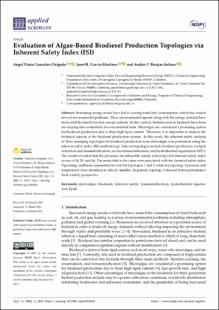 Except where otherwise noted, this item's license is described as 2021 by the authors. Licensee MDPI, Basel, Switzerland. This article is an open access article distributed under the terms and conditions of the Creative Commons Attribution (CC BY) license (https:// creativecommons.org/licenses/by/ 4.0/).