Xanthomonas citri subsp. citri (Xcc), the causal agent of type A canker, differentially affects all commercial varieties of citrus plants. Among them, Fortunella spp (kumquat) have higher tolerance to disease development, although the molecular mechanisms involved in their defense are not fully understood. In this study, using RNA-seq approach, the transcriptional responses of kumquat leaves at 24 h after water (controls) and Xcc inoculation were analyzed. A total of 1439 Differentially expressed genes (DEG) with statistical significance (p-value<0.025) were identified, with 444 being upregulated. These genes were found to be involved in pathogen recognition, cell wall remodeling and reinforcement, lignin biosynthesis, reactive oxygen species (ROS) production, pathogenesis-related proteins (PR) and biosynthesis of secondary metabolites including phenylpropanoids, terpenoids and alkaloids. Genes related to disease resistance (R genes) and salicylic acid (SA)-dependent systemic acquired resistance (SAR) were also induced. In turn, the 995 downregulated genes were mainly associated with photosynthesis, photorespiration, chlorophyll synthesis and cell growth. This suggest that, once the pathogen is detected, the plant generates a strong oxidative burst and its cellular machinery is directed towards the synthesis of secondary metabolites and defense proteins while its own growth is inhibited. Overall, these transcriptional changes provide valuable information about the molecular basis of the defense in kumquat plants, which may be useful in the design of new control methods for citrus canker. 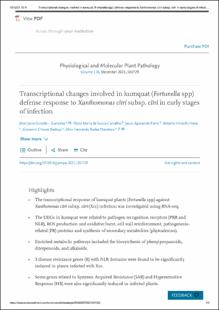