Objectives: This study was carried out in order to establish the potential offered by the sol-gel method to obtain Titanium/ Bismuth oxide coatings on 316L Stainless Steel (SS) substrates in biocompatibility applications. Methods/Analysis: The stable sol was synthesized by using Bismuth nitrate (III) pentahydrate and Titanium (IV) butoxide. The coatings were deposited by spin-coating technique at 4000 rpm and characterized topographically by Scanning Electron Microscopy SEM and structurally by X-ray diffraction XRD. Through the techniques of polarization potentiodynamic curves and Electrochemical Impedance Spectroscopy (EIS), the anticorrosive response of the �ilms was evaluated. The thickness was then measured, and biocompatibility test was developed. Findings: It was found that the coatings with high composition of the precursor titanium (IV) butoxide offer the best results as an anticorrosive application. Likewise, the growth of cells was uniform on the �ilms indicating that the medium offered by the �ilms does not present active cytotoxicity and surpasses by a large number the cellular growth level compared to stainless steel. Applications /Improvement: 316L (SS) is very useful in implantology, for its low cost compared with other materials. The implanted steel suffers corrosion by the physiological �luids of body. Titanium/Bismuth coatings establish a barrier between body �luids and SS implant. 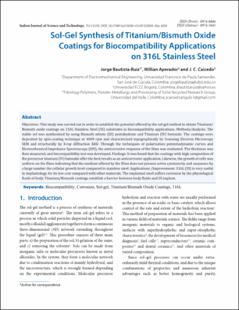