Haematococcus pluvialis has attracted much global attention due to its ability to produce huge amounts of astaxanthin, a carotenoid pigment widely applied in pharmaceutical, cosmetic and food industries. In this work, production of astaxanthin from Haematococcus pluvialis was performed under three different salt concentrations (0, 0.45 and 0.9% v/v) and wavelengths (blue, white and red) in order to evaluate the effects of salinity and light wavelengths on microalgae growth. A multifactorial 32 experimental design was used and its results were studied by Manova analyzer with 95% of reliability. According to the results, the highest amount of astaxanthin (9.72 μg/mL) was obtained at 0.45 %v/v of salt concentration and blue wavelength. 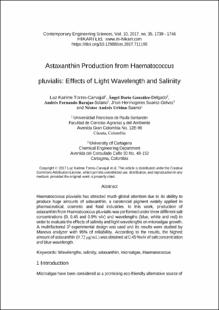