Journal of Physics: Conference Series
Reino Unido
In this research computer modeling was performed with the SuperPro Designer Software to simulate the industrial-scale production of poly-lactic acid using the Rizophus oryzae fungus. The previous to predict the higher output of poly-lactic acid from different strategies: in the first study, a PLA production of 5.56 (kg/h) was obtained with an operating cost of USD 121,722,644/year. Based on the results, improvements were made to the process. The first alternative resulted in a PLA production of 43.64 (kg/h) with a total operating cost of USD 37,356,085/year. The second improved significant differences in terms of the most massive production of PLA was 64.97 (kg/h), with an annual operating cost of USD 55,334,811 being the most promising to be carried on an industrial scale. 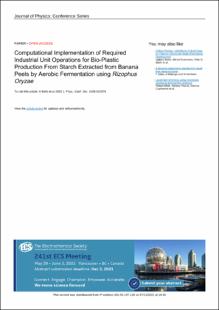