Journal of Physics: Conference Series
Londres, Reino Unido
The correlation between the maturity index and the compressive strength of concrete is validated for mixtures with strengths of 2000, 2500, 3000 and 3500 PSI, which are the most used in the civil engineering field. Temperature probes DS18B20 connected by the 1-Wire protocol to the Raspberry Pi 3 card were used to census the data and calculate the maturity index. The concrete mixtures presented A/C ratios of 0.820, 0.748, 0.680 and 0.623, which are consistent with those used in the construction industry. Compressive strength tests were performed every 24 hours during a 28-day test scenario in order to understand the behavior of concrete throughout the curing process. From the values of mechanical resistance to compression obtained in the control ages of 7 and 14 days it is inferred that the concrete has a normal hardening, likewise when comparing the experimental results of the resistance to compression, with those found using the method of maturity, it was possible to identify that at early ages (less than 10 days) they present uncertainties greater than 10% while at ages greater than 10 days of curing this error does not exceed 5%. In general, it was evidenced that the assembly carried out with the Raspberry pi 3 card and DS18B20 probes reliably allowed the monitoring, recording and storage of temperature and time data during the entire curing process. 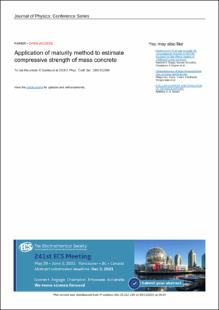