Journal of Physics: Conference Series
Reino Unido
This paper analyzes the impact of the Thomson effect on the performance of thermoelectric modules. For this, different mathematical models are carried out that involves the relationship between temperature and the seebeck coefficient. These mathematical models are based on the equations that describe thermoelectric effects and are solved using finite element methods. Through linear and polynomial functions of the seebeck coefficient, the different behaviors that can occur in the Thomson coefficient and their effect on the power and efficiency of thermoelectric modules are analyzed. The results show that by not considering the Thomson effect, there is a variation of 31% and 32% in the power and efficiency of the thermoelectric module when the temperature conditions change, which makes it difficult to estimate the performance of the module. This problem can be solved by considering the Thomson effect since it predicts an approximately constant value of electrical power and efficiency for a wide temperature range. For the analyzed conditions, power and efficiency of 5.25 W and 13%, respectively, were observed. The proposed methodology allows an adequate estimation to determine the performance of the modules. Therefore, it could be implemented to search for materials that provide better thermoelectric characteristics. 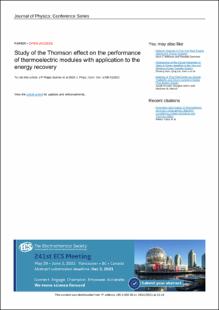