The purpose of this research is to determine the theoretical capacity of the Metrolinea transport system according on delay at bus stop predictive model, based on parameters measured “in situ”. The Metrolinea is an integrated mass transportation system (SITM) which was developed in Bucaramanga, Colombia, and is based on the concept of a bus rapid transit (BRT) with fixed stops in exclusive places. It has a design, service and specialized infrastructure. It follows a trunk line structure interconnecting the three neighboring municipalities of Bucaramanga, Floridablanca and Piedecuesta, guaranteeing their use and high passenger demand. The project consists of a delay model at bus stops along the different stops of the trunk corridor that connect these three municipalities, allowing us to predict the most useful parameter. The methodology developed in situ consists of visual observation, executed in the existing trunk, and has an approximate length of 16.8 Km. The distance between each of its stations is variable, ranging from 230m to 2980m. The measuring requires one to board the bus, record the times spent during the journey, calculating the one with the highest demand, recording the flow of passengers, as well as calculating the delay times, interruptions and incidents. The data was collected in the year 2017 on market days. The calculation methodology used is contained in the manual of transit capacity and quality of service (TCQSM), this allowed us to determine the calculations corresponding to the theoretical capacity of the system and delay at the bus stops model. 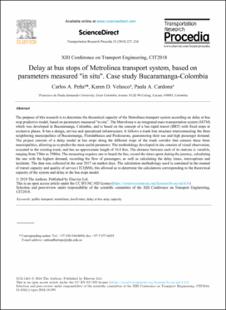