An integral PEST study of biomass as energy resource

The present work was carried out in order to evaluate the world's scientific production with respect to the topic of biomass, based on articles published from 2007 onwards. The data were obtained from the Web of Science data collection, and analyzed, through the HitsCite metadata processor, within which indicators were highlighted, such as the number of total publications, the countries that publish the most, in different periods of years, to establish the trend graphically and in the future, to be able to predict the behavior that will occur. The results show that of the 874 articles published to date, 168 were published by the United States, which is equivalent to 19.2%, followed by China, Italy and finally the United Kingdom with 65 articles published (7.4%), 64 articles (7.3%) and 56 articles published (6.4%) respectively. In addition, a PEST analysis was developed to analyses the behavior of the number of publications in relation to the political, economic, social and technological fields for each country studied, in order to be able to create means of prediction in the future. 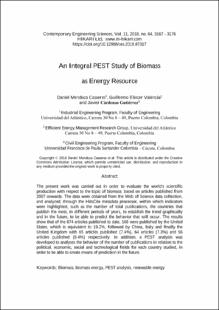