A conventional concrete mixture elaborated according to the parameters described in the Colombian Technical Standards NTC under the conditioning established by the Quake Resistant Standard NSR-10 that regulates our country. A residual ceramic sample was taken from elements of masonry and tiles from the brick industry Santa Rosa, the obtained material was taken to the crusher La Victoria, where the milling process and reduction of particles was performed as well as to the conventional mineral aggregates. The granulometry was performed to the coarse aggregate of the crushed ceramic material according to the NTC-77, simultaneously the respective test to determine its physical properties according to the stipulated by the same standards were performed. Designs of experimental mixtures were made, 10, 20-100% of the weight of the conventional concrete coarse aggregate was replaced by its equivalent in ceramic coarse aggregate. To the designs of both conventional and experimental mixtures, the test of concrete setting was performed with the help of the concrete slump test to determine its handling. The results obtained by the test performed to the different mixtures were portrayed in a table, were the obtained data for the conventional concrete mixture was used as a comparative base for the rest of the data. 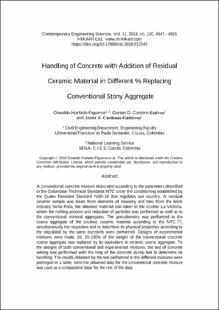