Journal of Physics: Conference Series
Reino Unido
A comparative analysis was performed on the mineral material extracted from 3 water sources in the city of Cucuta, from the rivers Tachira, Pamplonita and Zulia to determine the viability of their incorporation in the concrete mixtures for the construction of rigid floors. There were visits to the companies Preconcretos Trituradora la Roca y Concretos, and Tirurados, in charge of the material extractions, where samples of the crushed material "coarse aggregate" from each of the water sources were taken respectively. The granulometry of the coarse aggregate was performed according to the arranged parameters in the NCT 174 whose results were determinant for the conclusions. The trial of degradation to abrasion to each of the samples was executed, taking as guide the indications described by the Colombian INV-218-13 standard. The results obtained in the trial were analyzed and compared with the parameters stipulated by the INV standard described for the % of the degradation limit allowed for coarse aggregate for its usage as concrete material in the construction of rigid floors. It was concluded that each of the extracted materials from the water sources were viable according to the data obtained from their comparison. 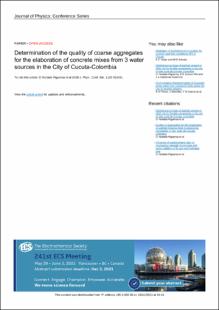