Journal of Physics: Conference Series
Reino Unido
A conventional concrete mix was elaborated using the Colombian Technical Standards NTC and Title C of the NSR-10 that rule in Colombia. 10 and 20% of the coarse aggregate volume was replaced with expanded polyethylene, 2 experimental mixes were elaborated with each of the incorporated %. 3 mixing cylinders were made, each one with the elaborated mixes to test their resistance to compression on days 7, 14 and 28. The obtained data in the tests performed on the material resistance laboratories from the UFPS (University Francisco de Paula Santander) showed the mechanical behavior regarding the resistance to compression of conventional and experimental concrete mixes at different concrete ages. The results of this research conclude that although there is a minimum resistance superiority in conventional concrete, the experimental mixes are viable for implementation in engineering projects. 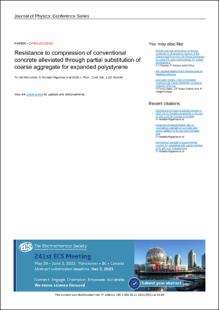