Vehicular flow analysis and diagnosis of the public transport

Journal of Physics: Conference Series
Reino Unido
Public transport is one of the major means of mobilization for the general population of a country, achieving great importance to its policies of mobilization and economic analysis because it creates controversy to have a poor quality of service, directly affecting the users and drivers of these means. Due to the above, an alternative is proposed for the decongestion of main public transport routes, presenting the degree of saturation and the performance index that can create different alternative routes by moving a percentage of the routes in the city of Cúcuta, Colombia. In order to evaluate the effectiveness of this solution, information was collected by means of surveys for users and drivers, analyzing the data with the SPSS version 21 software, manifesting that there is low quality in public transport. In this way, the final characteristics of this method are evaluated in the new alternatives and in the problem sector, satisfying the quality requirements of public transport worldwide. 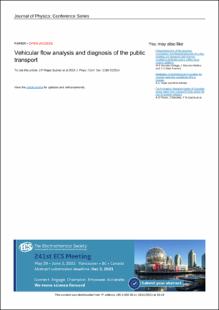