The objective of the research was to make known the experiences of calculating engineers in the face of the behavior of industrialized buildings in earthquakes of great magnitude in the departments of Santander and Norte de Santander, Colombia. This industrialized construction system for houses was taken as object of study due to its novel implantation in the departments. The planning, execution and application of the 2010 seismic standard applied in Colombia in the field of building construction was analyzed. In addition to the field experiences of the professionals and university professors of both departments, the research was based mainly on the technical knowledge of the specialists. These two characteristics were taken into account due to the absence of information on the structural behavior under earthquakes of great magnitude of the buildings constructed with the system in the departments. The interpretative method was used with the support of the computer-assisted qualitative analysis program ATLAS.ti, which allowed the association of codes through the relationships of the interviews. The results concluded in the feasibility of implementing the system as a method of construction of buildings resistant to earthquakes of great magnitude subject to strict monitoring of the parameters described in the relevant regulations for the country, however the information provided is of great importance for individuals and contractors in the construction area in Colombia, since the expert engineers in calculations have some contradictions as for the industrialized system, and this can be factor of incidences in the response to earthquakes of these buildings, it is for that reason that the information revealed is a novelty to take into account the types of systems that calculate them the same but really have many structural differences and this could be a key element in an earthquake of great magnitude. 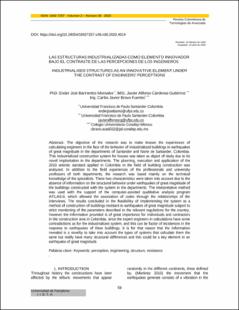