Verification of compression resistance between a conventional concrete and its addition of 5, 10 and 15% in volume of fly ash replacing fine aggregate

Journal of Physics: Conference Series
Reino Unido
A comparative analysis was performed with regarding the compression resistance of a conventional concrete mixture and its experimental addition of 5, 10 and 15% of fly ash with respect to the volume of its fine aggregate. The fly ash came from the thermoelectric Termotasajero located in the city of Cucuta in the Norte de Santander Department, Colombia, the previous studies performed on fly ash by the thermoelectric laboratories were useful as a reference to classify the ash. The results obtained in the compression tests for the experimental mixtures were compared to the results of the conventional concrete, where a superiority in the resistance of the experimental mixtures in early stages (7 days) was evidenced. Regarding tests performed on day 14 a minimum difference when comparing the mixtures was noted. The resistance test performed on day 28 showed superiority on the conventional mixture with a 2.03 Megapascals advantage with respect to the strengths of the experimental mixes. 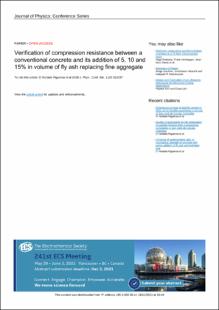