International Journal of Antennas and Propagation
Reino Unido
We discuss three sets of heuristic coefficients used in uniform theory of diffraction (UTD) to characterize the electromagnetic scattering in realistic urban scenarios and canonical examples of diffraction by lossy conducting wedges using the three sets of heuristic coefficients and the Malyuzhinets solution as reference model. We compare not only the results of the canonical models but also their implementation in real outdoor scenarios. To predict the coverage of mobile networks, we used propagation models for outdoor environments by using a 3D ray-tracing model based on a brute-force algorithm for ray launching and a propagation model based on image theory. To evaluate each set of coefficients, we analyzed the mean and standard deviation of the absolute error between estimates and measured data in Ottawa, Canada; Valencia, Spain; and Cali, Colombia. Finally, we discuss the path loss prediction for each set of heuristic UTD coefficients in outdoor environment, as well as the comparison with the canonical results. 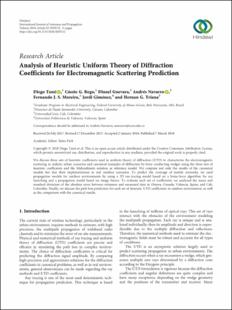