Journal of Physics: Conference Series
Reino Unido
The objective of this research is to perform a topographic characterization by atomic force microscopy of the surface of bismuth titanate (Bi/Ti) coatings varying the number of layers deposited on the substrates, considering that there were not results of reported studies in which these precursors were used. It is important to analyze the surface behavior of these coatings as a first phase of future researches to establish the viability of possible uses and applications in biomedical industry. The films were synthesized by the sol-gel method from bismuth nitrate pentahydrate and titanium tetrabutoxide. Subsequently, by means of the spin- coating technique, the coatings were deposited on 316L stainless steel in monolayer and bi- layer, as this type of steel has been widely used for medical applications due to its good compatibility. The roughness values of each of the coatings were also determined. It is concluded that there is a relationship between the topography of the surface and the roughness values of the films with respect to the concentration of the precursors, the number and the speed of centrifugation of the layers deposited on the substrate. High concentrations of titanium tetrabutoxide effect on the good densification characteristics of the coatings. 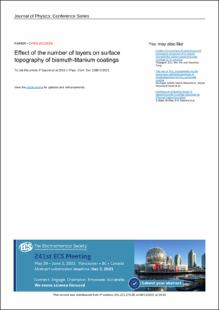