A proposal for updating the response spectrum of San Jose de Cucuta, Colombia

IOP Conference Series: Materials Science and Engineering
Colombia
An analysis of seismic signals captured in three stations of the network of accelerographs of the Colombian Geological Service (SGC, by its acronym in Spanish) was developed for the city of San Jose de Cucuta, Colombia. Earthquake Equivalent, Response Analysis (EERA) and DEGTRA4 software were used for analysis, processing and calculation of signal response spectra during the characterization and propagation modelling of the signal by profiles. For the accelerograms family, a normalization factor computed with respect to the Peak Ground Acceleration (PGA) was obtained by superposition against the typical design spectrum of the Colombian earthquake resistant code (NSR10). It was found that there is a band of frequencies above the maximum acceleration zone of the design spectrum of the current standard. This suggests a revision of the seismic threat of the city of Cucuta and the urgent need to develop the seismic microzoning, which would allow a substantial reduction of the seismic risk. 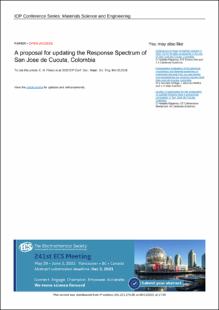