Ergonomic assessment of the work place of the footwear assembly line. Case: city of Cúcuta - Colombia

A quantitative diagnosis of the ergonomic valuation is presented for people who work as fitters in the footwear sector due to the use of chairs that are not related to the users' anthropometric measurements. To estimate the inconvenience, a population of 24 people working as fitters was taken, and a survey was carried out divided into three parts: analysis of the activity, ergonomics of the workplace and information on the chair, in which it was found that the dimensions of the chair are 21% below the recommended measurements, according to the anthropometric measurements of the user. Similarly, based on the General Shackel Comfort Scale, it was found that there is discomfort in the lower back, mid back, buttocks and neck mainly. Subsequently, a sample of 15 fitters with an average experience of 33.4 years was taken from a specialized company to carry out an osteomuscular valuation. It was found that the most representative conditions are carpal tunnel syndrome, musculoskeletal disorder, lowered shoulder and lordosis, with 80%, 73%, 60% and 60% of people affected, respectively, given the positions they adopt, the use of a non-ergonomic chair and repetitive movements that the work requires. It is concluded from the information collected, the perception of the users and the osteomuscular valuation that the seats used for the task are not adequate to the anthropometric dimensions of the fitters and generate effects on the health of the worker that impact on their comfort, quality of life and productivity. 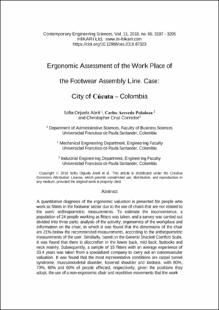