Analysis of research trends in biodiesel as fuel during last decade

International Journal of Applied Engineering Research
India
This paper presents a bibliometric study focused on the research carried out in the last 11 years on biodiesel as an alternative fuel. Tools such as HistCite were used to manage metadata found using the Web of Science search engine, including author names, titles, abstracts, publication dates, document types, addresses and references cited. In addition, the impact factor and H index of the journals they published were taken into account to analyze the reliability of the research. The study showed a tendency to increase over the years, from 76 publications in 2007 to a total of 2017 in 2017, an increase of 185.71%. Likewise, it was concluded, among other things, that of the 1423 documents obtained to carry out the study, 84.7% were scientific articles, being the majority of the works carried out, followed by the revisions that reached 5.8%. And that magazines such as FUEL, ENERGY & FUEL and ENERGY were among those that contributed the most to this research. In addition, it was demonstrated that the countries most interested in this technology are India, USA and Peoples R China, being these the ones with more than 254, 222 and 119 publications respectively. 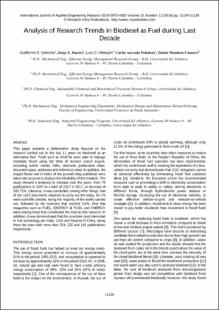