In ruminants, there are specific times during the estrous cycle or pregnancy when the corpus luteum (CL) may undergo regression. This review has attempted to summarize the physiological and cellular mechanisms involved in CL regression or maintenance during four distinct periods. The first period is near day 7 when animals that are ovulating after a period of low circulating progesterone (P4), such as first pubertal ovulation or first postpartum ovulation, are at risk of having a premature increase in Prostaglandin F2α (PGF) secreted from the uterus resulting in early CL regression and a short estrous cycle. The second period is when normal luteolysis occurs at day 18-25 of the cycle or when the CL is rescued by interferon-tau secreted by the elongating embryo. The uterine mechanisms that determine the timing of this luteolysis or the prevention of luteolysis have been generally defined. Induction and activation of endometrial E2 receptors result in induction of endometrial oxytocin receptors that can now be activated by normal pulses of oxytocin. Of particular importance is the observation that the primary mechanisms are only activated through local (ipsilateral) and not a systemic route due to transfer of PGF from the uterine vein to the ovarian artery. In addition at the CL level, studies are providing definition to the cellular and molecular mechanisms that are activated in response to uterine PGF pulses or pregnancy. The third period that is discussed occurs in the second month of pregnancy (day 28-60) when undefined mechanisms result in CL maintenance of an ipsilateral CL but regression of a contralateral (opposite side from pregnancy) CL. The final period that is discussed is regression of the CL just prior to parturition. Although, cortisol from the fetus appears to be the primary initiator of luteolysis, PGF seems to be the final signal that causes regression of the CL. Thus, in all four periods, regression of the CL is likely to be caused by the direct actions of PGF that is secreted from the uterus. The uterine mechanisms that result in secretion of PGF seem to be normally inhibited during the early luteal phase, making short luteal phases not a normal event, and are altered during early pregnancy (day 18-25) resulting in prevention of luteolysis. During much of pregnancy, the mechanisms that cause PGF secretion from the uterus in response to oxytocin are intact but luteolysis does not normally occur, perhaps due to lack of efficient utero-ovarian transfer of PGF. 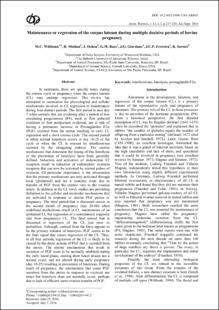