Maleinized Hyperbranched Polyol Polyester: Effect of the Content of Maleic Anhydride in the Structural, Thermal and Rheological Properties

The aim of this work is to obtain the material that, in the future, may become a better alternative, as a functionalizing agent, to maleic anhydride (MA), or a crosslinking agent with the least amount of functional groups. To achieve that goal, a hyperbranched polyester polyol (HBP) of the second generation (HBP2G) was modified with MA to obtain HBP2GMA. The effects of the proportion of MA in the structural, thermal, and rheological properties of the HBP2GMAs were evaluated. Furthermore, these properties were compared with those of the HBP2G. A reduction in the intensity of peak corresponding to the OH stretching of HBP2G was observed with the increase in the extent of HBP2G modification by the analysis of the infrared (IR). HBP2GMAs showed a peak at 3030 cm-1 in their IR spectra, which was due to the -CH=CH- stretching of MA. This was further assessed by 1H NMR analysis. The number of MA units grafted into HBP2G was between 4 and 9, indicating a high degree of functionality. All materials possessed viscosity values below 34.94 Pa·s at 110 °C, which were dependent on the grade of the modification percentage (MP) and the molar content of MA grafted into HBP2G. Mass spectrometry analysis demonstrated the formation of products by the esterification reaction between the HBP2G and MA. The thermal stability of the HBP2GMAs determined as the decomposition temperature (Td) was between 258 and 281 °C which was better than that of the HBP2G. 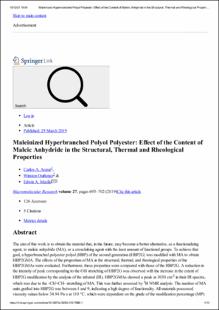