The purpose of the research was the analysis through the main labor market indicators by gender in Colombia and in the city of Cúcuta in the 2010-2017 period, through a descriptive and documentary methodology, with which the different indexes were analyzed and described. in order to be able to establish criteria of how the differences are by gender and among others as a global participation rate that expresses the pressure of the population in the labor market. This research concludes that the female population is higher than the male population in the entire period studied and their participation in the labor market is lower, in addition, the unemployment rate is higher in this period and the rate of employed persons is lower. 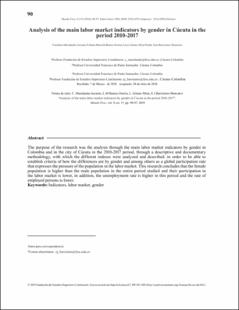