The research seeks to determine whether the stress concentration factor for flat plates with two stressed holes varies according to the application speed of the load. The research was developed using the experimental method, with two types of tests, one called low-speed load application and the other called high-speed load application. The behaviour of the theoretical stress concentration factor Kt has been studied on long flat plates with two holes under tension and made of isotropic material, with axial direction for the application of the vertical load. Different values were taken from the centre distance of the holes and it was found that the value of the stress concentrator Kt; for the two tests always tends to values greater than 3.8. A comparison was made between the results obtained and it was determined that there is variation between the values of the Kt factor according to the speed with which the load of the voltage test is applied, with the highest being the Kt with high speed test. 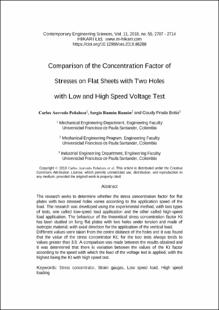