The objective of this study was to evaluate the cytotoxic effect of different sodium hypochlorite concentrations, using apical root cells of P. sativum as a bioindicator. Initially, the seeds of P. sativum were exposed to different concentrations of sodium hypochlorite (0.1, 0.2, 0.4, 0.8, 1.6, 2 mg L−1) and to a control solution based on distilled water. Next, root growth was measured during 24, 48 and 72 h. Subsequently, the mitotic index (MI) and cellular anomalies (5000 cells per treatment) were determined at 72 h. According to the results obtained, a decrease in root growth was observed at concentrations of 0.4, 1.6 and 2 mg L−1. Likewise, it was evident that, among all the evaluated concentrations, an inhibition of mitosis higher than 50% was presented. Additionally, chromosomal anomalies were also generated, such as Nuclear notch, lagging chromosomes and Chromosomal break, which were present in all the concentrations evaluated. In addition, the presence of micronuclei at concentrations of 2.0 and 1.6 mg L−1 indicate that sodium hypochlorite is a highly cytotoxic substance. Therefore, P. sativum is a specie that offers a feasible experimental model to be implemented in the laboratory with the aim to evaluate the cytotoxic effect of any cytotoxic substance. 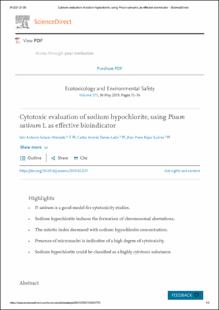