In this article the results of the impact characterization of PETG and PA6 thermoplastics are presented, they have been characterized statically and dynamically by the indentation test, and mathematical models developed in previous works have also been used to adjust the obtained models. The thickness of the specimen used and the mass of the impactor used were studied. The results have shown that the specimen thickness influences the value of some of the measured properties as the thickness increases, as well as that the impactor mass influences the velocity that is printed during the test run. 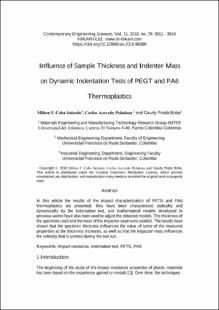