This article presents a sensitivity analysis based on a validated model of average value in natural gas generation engines under the phenomenologically based semi-physical modeling methodology, which includes both the cylinder, exhaust, and intake manifold and it can define the average operational variables and thermochemical properties of exhaust gases as a function of the variables instrumented in this type of engine at the industrial level. The results for a month of operation showed errors no greater than 5% in the temperature at the entrance of the cylinders (Temperature 6), while the power, load temperature and load pressure of the model presented deviations of less than 2% from the measured data. Additionally, the results of the sensitivity analysis evidenced that the main variable affecting most of the parameters under study is the flow of gas entering the engine, which causes a variation of 12.3% in Temperature 6, and 22.4% in electrical power. Next, the second most influential variable is Lambda, significantly affecting the efficiency by 8%. Finally, there is the RPM of the engine in its work cycle, which affects the temperature of the cylinder outlet by 34.5%. This means that when the flow of fuel in the engine decreases, there will be significant operational changes in the engine, and therefore in the thermal availability of exhaust gases. 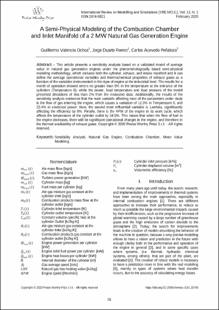