Recognition of the driving style in vehicle drivers

This paper presents three different approaches to recognize driving style based on a hierarchical-model. Specifically, it proposes a hierarchical model for the recognition of the driving style for advanced driver-assistance systems (ADAS) for vehicles. This hierarchical model for the recognition of the style of the car driving considers three aspects: the driver emotions, the driver state, and finally, the driving style itself. In this way, the proposed hierarchical pattern is composed of three levels of descriptors/features, one to recognize the emotional states, another to recognize the driver state, and the last one to recognize the driving style. Each level has a set of descriptors, which can be sensed in a real context. Finally, the paper presents three driving style recognition algorithms based on different paradigms. One is based on fuzzy logic, another is based on chronicles (a temporal logic paradigm), and the last is based on an algorithm that uses the idea of the recognition process of the neocortex, called Ar2p (Algoritmo Recursivo de Reconocimiento de Patrones, for its acronym in Spanish). In the paper, these approaches are compared using real datasets, using different metrics of interest in the context of the Internet of the Things, in order to determine their capabilities of reasoning, adaptation, and the communication of information. In general, the initial results are encouraging, specifically in the cases of chronicles and Ar2p, which give the best results. 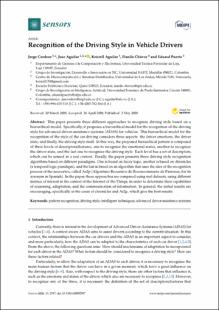