Journal of Physics: Conference Series
Reino Unido
The objective of this article is to present a computational estimate from a statistical physics approach and its contributions to Covid-19 in Colombia. Based on the daily data of contagions, recoveries and deaths, during the months of March to July, the estimation of the behavior of the epidemic was made using the nonlinear regression method with adjustment of curves by minimum squares. Highlighting the benefits that this method presents in the study of physical phenomena, it was used in the present research developing two types of modeling: exponential and Gaussian, and with these some predictions were made. The coefficients of determination of the exponential model were: 0.9641 for contagions, 0.9400 for recoveries and 0.9788 for deaths, and those of the Gaussian model were: 0.9799 for contagions, 0.9606 for recoveries and 0.9894 for deaths, showing a good correlation between the models and the real behavior of the pandemic, being the Gaussian one, the most approximate. This was also evidenced by comparing the prognosis of both models with the actual data for the first 13 days of August, concluding that the pandemic is beginning to mitigate, and the curve is flattening out. 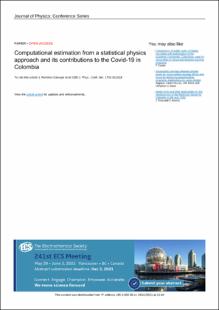