Mathematical argumentation in the classroom

Journal of Physics: Conference Series
Madrid , España
The article shares some elements of comprehensive type about "mathematical argumentation in the classroom"; whose analysis, was made from two fundamental categories in the development of an oral mathematical argumentation process for the conviction, contradiction and validation of a written mathematical argumentation process. The research addressed two central categories of argumentation as a discursive form, the first one is the epistemic position, and the second one is the discursive position that students unveil at the time of mathematically arguing the solution to a problem situation. The research was developed under the interpretative paradigm through the design of a case study directed by the theory and technique of a focal group, for the collection of information. In the findings, difficulties in the passage were evidenced from the semantic to the theoretical from the epistemic position; regarding the discursive position, the presence of three discursive forms was revealed: description, explanation and argumentation, the latter being the least used by the students. 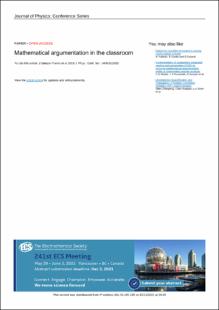