Journal of Physics: Conference Series
Londres, Inglaterra
A time series, also called a time series or chronological series, consists of a set of data, coming from realizations of a random variable that are observed successively in time. Its analysis involves the use of statistical methods to adjust models to explain their behavior and make reliable forecasts. In this article integrated autoregressive models of moving average are adjusted to the studied series, complemented with specific methods of fractal geometry as support for the detection of the existence of random cycles in the series. The present investigation implies the realization of simulations, in a first phase and, later, the analysis of temporal series of economic and social variables of the country and the region. 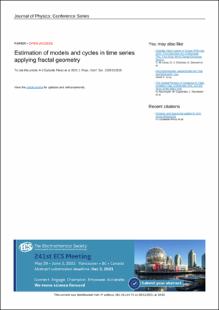