Journal of Physics: Conference Series
Berlin , Alemania
Niobium pentoxide (Nb2O5) nanoparticles were prepared by the polymeric precursor method using citric acid as a chelating agent and ethylene glycol as a polymerizing agent. The powders obtained were characterized by X-ray diffraction and scanning electron microscopy. The results showed that the presence of HNO3, HCl or NH4OH in the employed aqueous solution favour the solubility of the used precursor salt, as well as also inside the oxide phase formation. The initial Nb2O5 powders were amorphous. The amorphous powders heated at 500°C contained Nb2O5 TT-phase, whereas at 650°C the Nb2O5 T-phase was obtained. In this way an increase in the synthesis temperature is related to the increase of the crystallinity, according to the values of the crystallite sizes that were estimated using the Scherrer method. 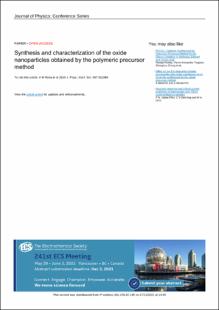