Journal of Physics: Conference Series
Londres, Reino Unido
Several companies generate large amounts of agroindustrial waste, which could be used as raw material for the production of bioethanol; among them, those that process and commercialize rice, which produce a large amount of husk, a lignocellulosic material, as a by-product. These companies generally use rice husk as fuel for the ovens, generating problems to the environment due to the emission of polluting smoke. The objective of this work was to obtain bioethanol from rice husk, taking advantage of its cellulose and hemicellulose content. The lignin was removed by an alkaline pretreatment with 2.00% w/v sodium hidroxide solution. Cellulose and hemicellulose in the husk were hydrolysed by enzymatic hydrolysis with acid cellulase for 72 hours. During this period of time, the concentration of total reducing sugars was monitored by the 3,5-dinitrosalicylic acid method, in order to determine the reaction time in which the highest concentration of total reducing sugars is obtained. The sugars obtained were fermented with saccharomyces cerevisiae, for the production of alcohol. During the enzymatic hydrolysis of the pre-treated rice husk, it was found that the highest concentration of total reducing sugars in the samples was 7.778 g/L, obtained in a time of 24 hours of hydrolysis. The sugars obtained were fermented with Saccharomyces cerevisiae, for alcohol production. A distillate was obtained with a concentration of 3.7% v/v. 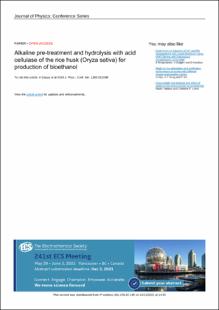