Journal of Physics: Conference Series
. Bismuth and titanium are elements with remarkable properties and applications in technological developments and in the field of biomedical engineering. The sol-gel method was used to form a bismuth-titanium system, which allowed to establish if it was possible to obtain films with anticorrosive properties on 316L stainless steel. The anticorrosive response was evaluated by means of Tafel curves, defining the parameters to obtain thin and functional films with good tribological properties. The coatings were obtained by the spin coating technique, varying the spin speeds from 3000 rpm to 5000 rpm with monolayer and bilayer systems. More positive values of corrosion potential were obtained when the steel is coated by the films, which implies a lower propensity to corrosion in saline medium, lower corrosion rates and higher potentials are reported for films with higher titanium content, likewise, better efficiency of the films with respect to the uncoated substrate is presented, the higher the titanium content and a strong influence between the calculated efficiencies and the centrifugation speeds is not observed 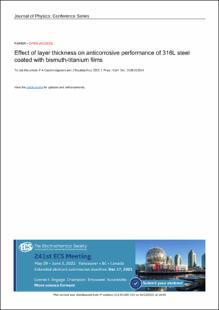