Journal of Physics
Reino Unido
Itaconic acid is a metabolite produced from biotechnological pathway using the microorganism Aspergillus terreus. It is used in a wide number of sectors such as industry, agriculture and health. Based on its chemical properties, itaconic acid is a great interest for replacing polymers and resins derived from petroleum. However, its production is still expensive and this latter hinders large scale studies regarding itaconic acid production. Nowadays, simulation is a great alternative to overcome this problem. It allows researchers to make a more effective evaluation and self-assessment, reducing costs and avoiding losses at large scale operation. For that reason, the purpose of this research is performing an Itaconic acid production simulation on industrial scale using SuperPro Designer software. Costs reduction improvement is also analyzed. 90g/L of glycerol, 1g/L of NH4NO3 and 1.25 of KH2PO4 are set up on simulation as media composition reported from references. Results regarding itaconic acid crystals showed a productivity of 171 kg/h and an operating cost closed to 42.0 USD/kg. Interestingly, a 17 % productivity increase is reached by proposing a stream recycling based on itaconic acid recovering from downstream centrifugation processing. The latter based on a higher productivity estimated (200 kg/h). Also average costs are reduced at 12 % since 38.1 USD/kg is found using improvements mentioned. Results found here demonstrate the potential usage of simulators for estimating costs and production which allows predicting the bioprocess feasibility 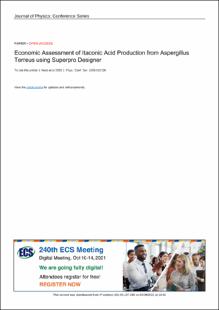