ACS Omega
Phycobiliproteins (PBPs) are a group of brilliant pigment proteins found in cyanobacteria and red algae; their synthesis and accumulation depend on several factors such as the type of strain employed, nutrient concentration, light intensity, light regimes, and others. This study evaluates the effect of macronutrients (citrate buffer, NaNO3, K2HPO4, MgSO4, CaCl2, Na2CO3, and EDTA) and the concentration of trace metals in BG11 media on the accumulation of PBPs in a thermotolerant strain of Oscillatoria sp. The strain was grown in BG-11 media at 28 °C with a light:dark cycle of 12:12 h at 100 μmol m−2 s −1 for 15 days, and the effect of nutrients was evaluated using a Plackett−Burman Design followed by optimization using a response surface methodology. Results from the concentration of trace metals show that it can be reduced up to half-strength in its initial concentration without affecting both biomass and PBPs. Results from the Plackett−Burman Design revealed that only NaNO3, Na2CO3, and K2HPO4 show a significant increase in PBP production. Optimization employed a central Non-Factorial Response Surface Design with three levels and four factors (34 ) using NaNO3, Na2CO3, K2HPO4, and trace metals as variables, while the other components of BG-11 media (citrate buffer, MgSO4, CaCl2, and EDTA) were used in half of their initial concentration. Results from the optimization show that interaction between Na2CO3 and K2HPO4 highly increased PBPs’ concentration, with values of 15.21, 3.95, and 1.89 (% w/w), respectively. These results demonstrate that identifying and adjusting the concentration of critical nutrients can increase the concentration of PBPs up to two times for phycocyanin and allophycocyanin while four times for phycoerythrin. Finally, the reduction in non-key nutrients’ concentration will reduce the production costs of colorants at an industrial scale and increase the sustainability of the process. 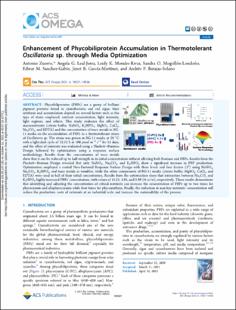 Except where otherwise noted, this item's license is described as 2021 The Authors. Published by American Chemical Society