In this paper, we propose an emotional model for robots in a multi-robot system, in order to allow emerging behaviors. The emotional model uses four universal emotions: anger, disgust, sadness, and joy, assigned to each robot based on the level of satisfaction of its basic needs. These four universal emotions lie on a spectrum where depending where the emotion of the robot lies, can affect its behavior and of its neighboring robots. The more negative the emotion is, the more individualistic it becomes in its decisions (anger, sadness or disgust). The more positive the robot is in its emotion, the more it will consider the group and global goals (joy). Each robot is able to recognize another robot′s emotion in the system based on their current state, using the AR2P (AR2P for its acronym in Spanish: Algoritmo Recursivo de Reconocimiento de Patrones) recognition algorithm. In this way, it can use this information of the emotions to decide with whom collaborate. Specifically, the paper addresses emotions’ influence on the behavior of the system, at the individual and collective levels, and the emotions’ effects on the emergent behaviors of the multi-robot system. The paper explores the emerging behavior in two multi-robot scenarios; nectar harvesting and object transportation. The results show that the emotions are important to the emergent behavior in a multi-robot system. 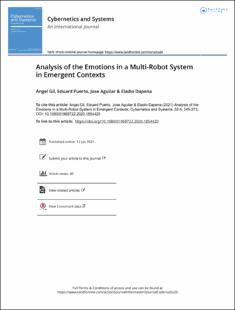