Journal of Physics: Conference Series
Londres, Reino Unido
Tungsten carbide is used in the production of cutting tools for steel and as protection against wear due to its extremely high hardness. High speed oxygen fuel spraying process has been widely used to deposit WC-Co coatings. However, the decomposition and oxidation of WC-Co has been reported during the process, where carbon and tungsten are released, resulting in the formation of an amorphous matrix with the cobalt of the compound. This is attributed to the high heating and cooling rates suffered by the raw material. An alternative method is the thermal spray by flame, which allows controlling the working temperature and the residence time of the particles in the hot flame, avoiding the decomposition of tungsten carbide, on the other hand, it is a versatile and a low cost method. In this study projection parameters of a WC-18Co coating sprayed with a thermal flame spraying process from a commercial feedstock powder were determined to decide the conditions under which compact coatings are obtained with low porosity, avoiding dissociation of the tungsten carbide. The composition of the powders and substrates was determined by X-ray fluorescence microscopy and optical emission, respectively, X-ray diffraction studies were performed to characterize compositions and microstructures the coatings sprayed; the morphology was by scanning electron microscope. It was found that the best condition for this type of coatings is a neutral flame at a projection distance of 12 cm. 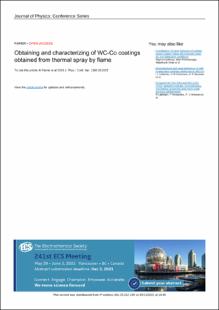