Journal of Physics: Conference Series
España
Economic growth is a function of the interactions between the different productive factors framed in the economic policy of an economy. The present work tries to explain the economic growth in developing economies, for which a variation of the model on the dynamics of growth proposed by Lukas is proposed, consisting of using, instead of the production function of Cobb-Douglas, a function of production with constant substitution elasticity, since it is very probable that in incipient economies, this one better reflects the functional relationship between factors of production. 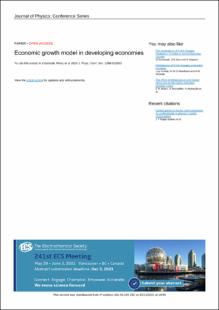 Except where otherwise noted, this item's license is described as Content from this work may be used under the terms of the Creative Commons Attribution 3.0 licence.